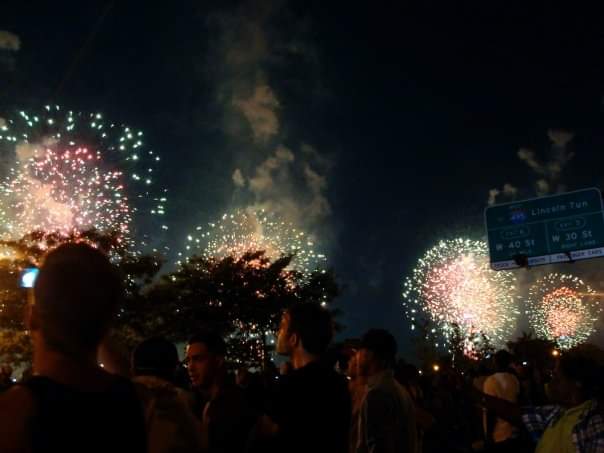 Everything in Between, Lifestyle

The Fourth of July

The Fourth of July was my second favorite holiday when I was growing up, next to Christmas which is also my birthday. I loved the family get together, the aroma of hot dogs and hamburgers wafting through the open air while I battled my cousins in a friendly game of badminton. I especially loved the fireworks. That feeling of the boom in my chest was akin to the bass of my favorite song on the radio.

Mom and I had traditions. She would make her famous pasta salad and I would bake sugar cookies complete with red, white, and blue icing and sprinkles. Her pasta salad, though. I like to recreate it from time to time minus the bacon because, well, pescatarian and all.

I’ll never forget the year my reflexes were tested after my dad lit a rocket that, instead of shooting straight up in the air, it came straight for my face. Thankfully, at fifteen, I had pretty great reflexes – still do, in fact. Then, there was the year that whoever was in charge of shooting off Lenexa, Kansas’ annual fireworks show was rumored to be drunk. The explosions were very low to the ground resulting in remnants falling into the audience. Large chunks of what looked like tar was hitting our heads and smaller pieces were getting into our eyes. Needless to say, while certainly memorable, that Fourth of July wasn’t the most pleasant.

As I’ve matured, holidays, the Fourth of July in particular, have taken on a whole new meaning for me. The cookouts are a distant memory, though the nasal nostalgia is quite strong. On a beautiful summer evening, I can sometimes smell someone grilling burgers nearby and I’m transported. I’m right there in my aunt’s backyard, swinging the badminton racket, while inhaling the humid summer air, anticipating that first bite of my mama’s pasta salad.

I have a love/hate relationship with fireworks now and most holidays, for that matter. Living in drought-ridden California and being privy to the terror the sound instills in some animals have motivated me to find new ways to enjoy the Fourth of July. Not to mention, and this won’t be a popular opinion among many but I’m unapologetic about my truth, American independence isn’t the same for every American.

Seeing the neighborhood fly their red, white, and blue flags during this holiday doesn’t tell me anything about the character of said neighbor or their willingness to show up for each other. What is also true is that I’m always grateful to live in a free country and have the privileges I have because of the men and women who fought and still fight for it. I’m just not naïve enough to believe that every American enjoys those same privileges and until that’s the case, Fourth of July will never mean to me what it meant to me in my youth.

GRIEF DURING THE Fourth of July

Grief also inevitably impacts these days that are meant to be spent surrounded by family, family that I’m no longer surrounded by. The Fourth of July could almost sneak by, if it weren’t for the sound of World War III outside. Every year is different and I usually don’t know how I’m going to feel until I’m living it. I usually don’t know if I’m going to want to celebrate or do nothing until the smell of the neighbors’ bar-be-cues wafts through my window and the sound of incessant explosions echoes through the sky.

Over the years, I’ve learned to accept the unknowing but it’s never easy. While I’m trying to be gentle with my emotions, I’m acutely aware of how short life is. Sometimes, I get upset with myself for being unable to escape the funk I’m in because I remind myself that Fourth of July only comes around once a year!

I do believe I make up for all the holidays I’ve allowed to pass in quiet in that I’ve decided that a holiday isn’t necessary to celebrate something. I don’t wait until a “special occasion” to open up the “really good” bottle of wine or to invite friends over for dinner, and I don’t wait until the Fourth of July to make my mother’s pasta salad.